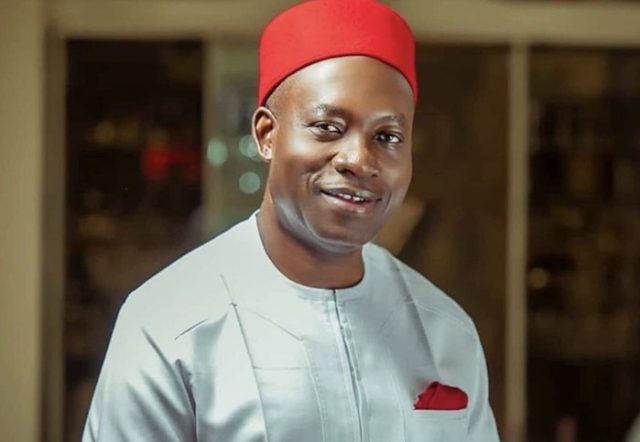 Anambra State Governor Chukwuma Charles Soludo CFR has increased the salaries of all state officials by 10%. In addition, he promised to give them a Christmas bonus of N15,000.

The governor made the news at the 2022 Public Service Day ceremony held at the Anambra Secretariat Complex in Awka.

Impact of the Performance Management System on the Nigerian Public Service”

Soludo reiterated, “Given my personal past as a worker, you must understand that what we cannot do for the working class is practically impossible.”

“In the matter of Christmas rice, we examined prior practices. The expense is astronomical.

“I understand that in prior years, the previous government provided civil personnel 25 kg bags of rice for Christmas.

“The condition of Nigeria is poor. Everyone is grumbling. I am perplexed by your ability to deal with the escalating costs.

“A 50-kilogram bag of rice costs over N40,000 today.” That exceeds the pay of a graduate working in the public sector. Something is incorrect!

“What we will do instead, between now and tomorrow, is ensure that more than 24,000 of our seniors are cared for to demonstrate good faith. I wish we could do more, but you will receive a Christmas bonus alert of N15,000 today,” Soludo promised.

“The income is not increasing, and neither is the government’s revenue. We cannot create currency. The cost to power the Secretariat for one hour is now three to four times what it was previously.

“I understand how you feel and wish that our revenue would increase so that we could increase it according to Nigeria’s inflation.

“The Chief of Staff requested the release of funds to process promotions.

“The budget for next year has been drafted and signed. Anything not included in the budget cannot be done.

“I received a report recommending small salary modifications a few days ago. We will assess the situation and determine what is viable, Soludo said.

“Since February, NNPC has not paid a cent to the federation account, and given the status of our finances, we are unable to accomplish everything at once; therefore, we are collecting taxes.

“Next year, Lagos anticipates receiving 100 billion naira each month through IGR, while Anambra aims for 3 billion naira. “However, I guarantee ndi Anambra that any funds that come our way will be utilized prudently,” Soludo pledged.

“On public service day of the previous year, I was here to solicit your votes. I have came before you today as the Governor of this state. You hired me as your Chief servant, and I am now your employee.

“I appreciate your service to Anambra. I am the Chief Public Servant, and there would be no public service without you.

“We have 21 commissioners, ministries, and agencies delivering every aspect of government. They contribute to what makes Anambra what it is today. I commend the whole Anambra State Public Service ministry and employees.

READ ALSO:  In order to find the woman who defended a passenger on an airplane, a man is offering N100,000

“I congratulate the 33 recipients picked for special recognition, but that does not imply that others are not working hard.

“I informed the Head of Service that it is not her responsibility to determine whether performed well or not. You may have that for your subordinates. You cannot identify which commissioner performed well. Because they are your coworkers in the government, I felt compelled to clarify this in order to prevent dysfunction.

“Despite this, each ministry accomplished something this year. This year, our work commenced on March 17th.

“We vowed to establish a hospitable and affluent nation. This is our mission, and you must all do it. This message was provided through the head of service.

“We are not meant to be honoring public service at this time of year, but I insisted on thanking you all for 2022 before we enter 2023,” he said. Soludo said

“Our five fingers of government consist of Security, law and order, Economic transformation, social agenda, altering the way government operates, and the environment.

“When we came to power, eight local governments had been taken over by criminals, and we have reclaimed our land from the criminals. They have been expelled from our bushes and woodlands.

“One insane man in Finland declared a five-day house quarantine, but the quarantine was not observed in Anambra,” said Soludo.

“We will return to full capacity, operating five days every week. When we work four days and our children attend school four days, we will not be able to provide the same level of service as those who work five days.

“We must reclaim our state, or we will lose 20% per week.” Security and law and order must be totally restored in Anambra. In our state, kidnappers and criminals must give way.

“We have captured 100 percent Igbos, but this must end,” Soludo assured.

“We are establishing regenerative agriculture, attempting to get major industrial parks operational, and signing an MOU with EEDC to ensure that power is available 24 hours a day, especially in the state’s three largest cities.

“Streetlights are returning. It is impossible to continue fueling them with diesel now that a litre costs over N800. We are replacing them with solar technology because it is more strategic and sustainable.

“On the road, we declared a state of emergency due to the road problem in Anambra. We’ve awarded nearly 250 kilometers of road.

“We must deliver within the next 24 months, which will be unprecedented in the state. We’ve just been at the office for nine months, yet things are already moving forward.

“We are eliminating the period of hospitals without doctors, nurses, and consultants as part of our social mission. Our general hospitals have recruited more than 200 personnel.

Within nine months of instituting our policy, we issued appointment letters to 5,000 educators. It is entirely merit-based, openly transparent, and we seek the greatest candidates regardless of their origin. The child’s interests should be taught by the most qualified instructor available, and this is what we intend to accomplish.

“Teaching is a calling and vocation, not simply a job! “What we’ve done is unprecedented in the Anambra Teaching Service, and I hope they’ve received their December pay,” stated Soludo.

“Because everyone was taught by a teacher, we honor our public officials, especially our teachers.

“Currently, 5,000 youngsters are undertaking diverse training as part of the one youth, two skills initiative, and by next year, we will have invested billions to empower them.

Soludo stated, “We have hired vigilantes and empowered other security apparatus to ensure the safety of Anambra.”

Our tagline is “chop all cutables and shun all bycottables.” We manage our resources and pay our expenses in this manner.

“When we arrived, pensioners had not gotten their gratuities since 2018, but we determined that this was not the best course of action. It was terrible for us to see these retirees work for over 30 years without receiving gratuities.

“As of 2018, everyone who retired from the Anambra public service under my watch has been paid their gratuities.” We are making the payments gradually in order to restore their hope.

“Around sixteen states are experiencing trouble paying salaries, but Anambra insists that workers will continue to be paid on the 25th of every month. We are not complacent about it. We will continue to pay employees on time. That is our promise. “As a public servant, I know how you feel,” Soludo continued.

In her opening remarks, the Head of Service, Barrister Theodore Igwegbe, praised God for keeping everyone alive to witness the first day of public service under the new administration.

“We acknowledge and celebrate the diligence and excellence of colleagues who have distinguished themselves in the performance of their responsibilities.

She remarked, “We rededicate ourselves to discipline and service delivery to our personnel.”

It is an annual event scheduled for the 23rd of June, however each state is permitted to determine its own date.

“The topic of the event coincides with the transition of our state to a new administration, reflecting on the stewardship of the people.

“Public service is contingent on public confidence,” she remarked.

“The Federal Government of Nigeria institutionalized public service through the development of a framework. On August 8, 2022, the Anambra EXCO approved a development plan and blueprint that I created for the advancement of the civil service.

“They align with the administration of Governor Soludo’s vision. She noted that the systematic fundamental areas are capacity building, performance management, service delivery, anti-corruption, value proposition, and digitization.

Regarding employee welfare, enumeration, and compensation, states should examine their staff pay, promotions, and compensation system. It will make the service appealing to talent pools and drive employees to always deliver their best effort.

“A full minimum wage proposal has been filed, and we await approval.”

“Busses for the civil services have deteriorated severely and have been in the shop for three years. “The Governor has authorized repairs to the buses until replacements are provided,” she stated.

She remarked that “Mr. Governor has graciously provided leave allowance for 2022 and December wages.”

“Declining efficiency, productivity, and low worker morale are some of the difficulties facing government employees.

“Our appeal to Mr. Governor is for the full implementation and consideration of the national minimum wage in the state, the upward review of salaries to combat the economic challenges of the country, the approval of funds for the civil service commission to conduct 2023 promotion interviews, the provision of official cars for permanent secretaries and directors as was done in the past, the provision of work tools, computers, and the procurement of buses to alleviate transportation difficulties.”

“We also request the appointment of permanent secretaries, as the current permanent secretaries are in charge of two ministries, which is impeding productivity; billboards for the Jerome Udoji Secretariat Complex in Awka; the desilting of drainages in the complex; the procurement of office furniture for use in the offices; and the repainting of the buildings and fence of the Secretariat Complex.

“We swear our undivided loyalty and devotion to you and your government. “We pledge to work diligently to ensure that your vision for the state is realized judiciously,” she promised.

It was observed the awarding of the Distinguished Merit Award to the Commissioner for Lands for outstanding performance and reforms in the Ministry of Lands, as well as the awarding of Certificates of Merit to 33 officers from other ministries for their remarkable service and devotion.

The Head of Service admonished the recipients not to let up on their efforts.

She also praised the governor for his affable demeanor and concern for civil personnel, as well as his appointment of 5,000 teachers and huge road development, among other other accomplishments.