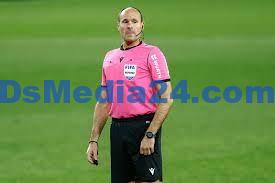 The Mirror says that Mateu Lahoz has been kicked out of this year’s World Cup in Qatar because of how he handled the match between Argentina and the Netherlands in the quarterfinals on Saturday.

Even though Argentina won on penalties, the players still didn’t like how the referee handled the game.

Lionel Messi, the captain of the Argentine team, was not happy with how the official was doing his job.

Messi told TyC Sports, “This game shouldn’t have ended the way it did.”

“I don’t want to talk about the referee because they will punish you. But people could see what was going on. Before the game, we were scared because we knew how he was, and I think FIFA needs to look into this. You couldn’t put him in charge of these games.”

Emiliano Martinez, the goalkeeper for Argentina, was not happy with how Lahoz played. He said, “The ref gave the Netherlands everything.” Everything went wrong.

“For no reason, he gave us 10 extra minutes. He only cared that they scored. That judge is nuts. Arrogant. When you say something to him, he responds. It’s insane.

“He wanted to get rid of us because Spain was out. He’s the worst referee at the World Cup. He’s useless, so I hope we won’t have to deal with him again.”

Now, we know that Lahoz’s performance has ended his World Cup run. The 45-year-old referee will not be in charge of any more games at the tournament and is expected to go back to Spain.

READ ALSO:  2023 APC victory is the only option, according to President Buhari