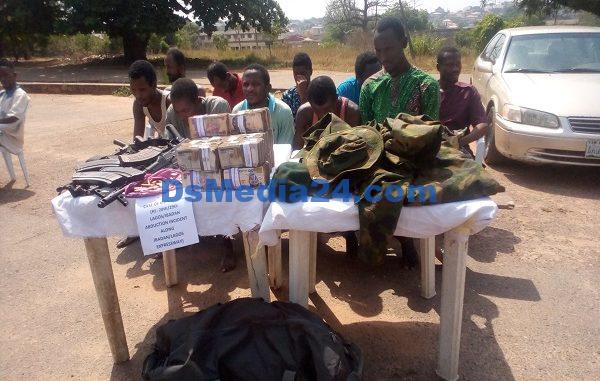 On Thursday, the Oyo State Police Command said that they had arrested people they thought were kidnappers who were terrorizing the Lagos/Ibadan expressway.

They were found with N7.5 million in cash, four AK-47 rifles, 75 AK-47 live rounds, two sets of military camouflage, and one police beret.

On the Lagos-Ibadan expressway, people have been attacked by kidnappers.

Prof. Adigun Agbaje, who used to work at the University of Ibadan (UI), was one of the people who died.

Adewale Osifeso, the spokesman for the Oyo State Police Command, showed the suspects around the headquarters in Eleyele, Ibadan, and said that the suspects had attacked a group of police officers.

The officers were responding to a call for help to save people who had been taken hostage.

During the fight with the kidnappers, a police officer was killed.

Osifeso said that the people who were thought to have taken the people were taken through the thick forest along the expressway and taken to an unknown location.

They had also asked family members for money.

“In one of the best-coordinated reconnaissance operations in the history of the Command, all operational, tactical, and intelligence assets were brought together and used as one to reach the goal of rescuing the abductees safely and catching the people who took them so they could be tried.

“The Oyo State Police Command caught Babangida Buhari Awalu and Kabiru Aliyu with the help of technology and intelligence, along with help from Amotekun (the Oyo State Security Network) and other community partners.

“Both of them ride motorcycles for a living and deliver packages for the kidnap syndicate. They were caught when they went to the Ojoo Area in Ibadan to get “exchange money” for other members of the gang.

“Five members of the criminal gang were caught after more in-depth and careful investigations.

“Three more suspects said their names were Adewuyi Sunday, Ayanwola Gbenga, and Rafiu Abdulmajeed. They said they were from the Gbugbu area of Kwara State and the Ago-Are area of Oyo State.

“It was also found that the money that was taken from the victims was put into the bank accounts of these three other suspects so that it could be given to other kidnapping gang members.”