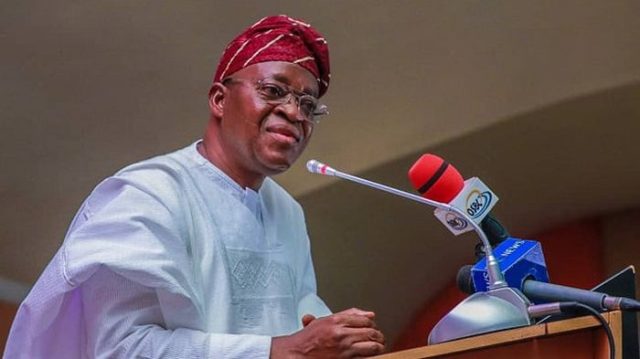 The Osun government’s asset recovery panel has ordered the state’s most recent governor, Gboyega Oyetola, and his wife Sherifat to relinquish any current possessions of official cars.

Olawale Rasheed, the governor’s spokeswoman for Ademola Adeleke, announced the information on Friday.

Tokunbo Salami, the chairman of the asset recovery body, said that the directive also applies to former state appointees.

According to reports, Oyetola has 11 vehicles, while his wife is alleged to own “many” types of government vehicles.

In the state, Salami said, there is no law that permits any elected or appointed officials to take state cars with them after their terms are up.

According to the statement, “The Assets Recovery Panel of the Osun State Government has asked former Governor Gboyega Oyetola, his wife, Hajia Kafayat Oyetola, and other former appointees to immediately return sundry vehicles valued at N2.9 billion currently in their possession.”

“After conducting its due diligence, the committee has determined that the impacted former officials should hand up any government vehicles they may still own.

“This is the first group of retrieved automobiles. The second batch will be ready soon.

To prevent coercive actions for the recovery of public assets, “all relevant authorities should immediately return the vehicles in their possession.

The wife, Mrs. Kafayat, also owns a number of brands of government vehicles that were seized in violation of the law.

Former appointees who held positions as special advisers, stewards of local governments, board chairs, commissioners, and secretaries to the state government are also affected.

According to the statement, “The former Deputy Governor has more than seven government vehicles in his control in violation of the terms of the law.”

All impacted ex-officials must immediately abide by the aforementioned order or face legal action.