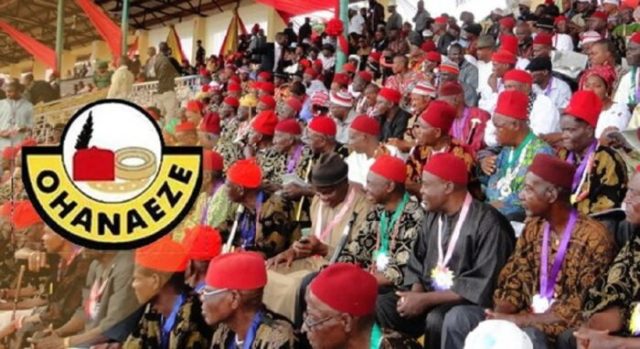 The leadership of the Igbo town unions has been urged to use this year’s Christmas and New Year to address the security concerns and recurrent stay-at-home behavior that have harmed the South-East region’s economy and social life.

Ohanaeze Ndigbo advised them to communicate to the young people in their local areas on the value of embracing hard work and avoiding get-rich-quick mentalities.

The group expressed its confusion over how the South-East, which had previously been the most tranquil zone, had suddenly turned into a place only linked with crimes and violent activities in a statement released by its National Publicity Secretary, Chiedozie Alex Ogbonnia.

The statement reads: “Until April 5, 2021, when hoodlums or the unknown gunmen stormed and overran the Correctional Centre, Owerri, and liberated a total of 1,844 prison inmates, the South-East of Nigeria was regarded the most calm and serene geo-political zone.

“Ohanaeze had examined the tactical prowess of the local non-state players to overpower a heavily defended Correctional center and release a total of 1,844 convicts without any arrests. The Igbo have experienced various types of insecurity since that occurrence.

In many areas of Igboland, kidnappers and community invaders have now joined the threat posed by herdsmen-farmers conflicts. These latest changes have resulted in the loss of hundreds of lives. This is disgusting and unworthy. To challenge the narrative, a dramatic action must be taken.

“There is no denying that the South-epidemic East’s of stay-at-home behavior has severely harmed the Igbo economy.

Evidence suggests that our Igbo foes are pleased with our decision to point the gun’s barrel inward.

“It seems unfathomable that certain individuals would choose to ruin its economy. At the town meeting, this regrettable exercise needs to be discussed.