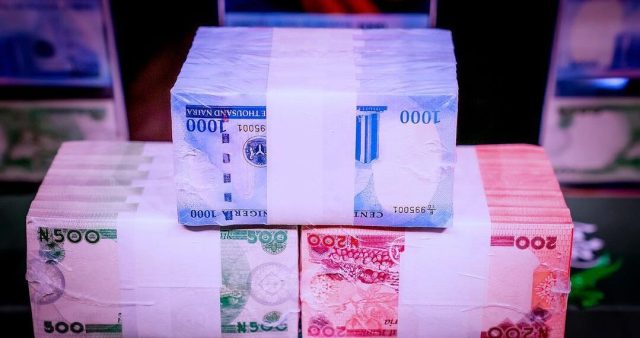 Today, commercial banks will start dispersing the eagerly anticipated, newly redesigned Naira notes from the Central Bank of Nigeria (CBN) to clients around the nation.

Godwin Emefiele, the governor of the Central Bank of Nigeria, had previously stated in October that the apex bank will issue newly designed naira notes by December 15, 2022.

Additionally, he stated that as of January 31, 2023, the old notes would no longer be accepted as legal cash.

Emefiele emphasized that the redesign of the naira notes would aid in reducing ransom payments to terrorists and kidnappers as well as counterfeit notes.

The head of the CBN said it was concerning that Nigerians were hoarding 85% of the entire amount of cash in circulation.

Top commercial bank executives told The PUNCH on Wednesday that they had received the new notes from the CBN a few days prior and that their customers will start receiving the redesigned money on Thursday (today).

“We only received the money (new notes) a couple of days ago. The money has been sent from our central office to numerous regional offices across the nation. My branch will go to a nearby office to pick up our allocation. According to a top official of a commercial bank who spoke to one of our correspondents on condition of anonymity on Wednesday because he was not authorized to comment on the subject, “We will start delivering the new notes to our customers by Thursday.”

READ ALSO:  As Buhari unveils the new naira notes, there are conflicting reactions: "They Only Changed The Colors To Deceive Us."

The new notes had arrived, according to numerous banking sources, and were being stored in their vaults.

They stated that starting on Thursday, the new notes would be distributed to consumers in the banking halls.

The new notes have arrived, and consumers will be able to purchase them starting tomorrow (Thursday), according to a Polaris Bank representative who asked to remain anonymous.

Also, various financial sources said they have started to adjust their ATMs to detect the new naira notes.

“Most of the banks have started redesigning their ATMs so that they can detect the new notes of N1000, N500, and N200,” a top bank executive stated.