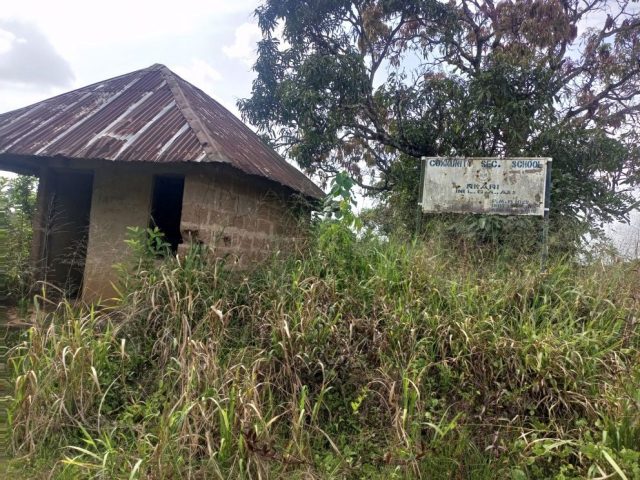 Eight months after the people of Nkari community in Ini Local Government Area of Akwa Ibom State and their neighbors in Usaka Ukwu, Ikwuano Local Council of Abia State signed a Memorandum of Understanding to embrace peace, normal activities have not yet returned.

DAILY POST says that the MoU was signed to end the long-running boundary war, which had killed many people and led to both sides stealing crops.

According to the 2006 census, there were 9,900 people living in Nkari. In the late 1940s, Nkari and the people of Ariam Usaka in Abia State fought over a boundary and who owned the farmland.

About 18 people from both states died in the crisis in 2021 alone. A peace agreement was signed on January 26, 2022, by the Joint Peace Agreement Drafting Committee in the presence of the Head of the Army Camp, Lt. N.G. Kebbe, the two Local Government Chairmen of Ikwuano and Ini, Chief Steve Mpamugo and Hon. Israel Idaisin, and other relevant stakeholders.

The agreement said, among other things, that both sides must commit to peace, re-cultivate the old cultural practices of unhindered visits, free movement, and avoiding provocation and the use of arms in any situation over the disputed areas.

But it’s one thing to live through a war and something else to live through peace. War changes relationships so much that they can never go back to how they were before.

Nkari is one of the communities in Ini Local Government, which is known as the “food basket” of the state. It is known for its industry and hard work, but it is completely cut off from basic amenities that make life easier in other parts of the state, such as a good road, a health center, a school, portable water, and electricity.

Even though they didn’t like the presence of non-government groups, the crisis at the time made things even worse for the people and made them accept their fate.

Since the crisis started up again in 2020, the schools in the community have been closed and show no sign of reopening. This is because the teachers assigned to the schools have refused to go back to work, even though the warring parties signed a peace agreement early this year.

A trip to the only secondary school in Nkari, Community Secondary School, Nkari, and the only primary school, Methodist School Mbente, both in the Ini Local Government Area, left a lot to be desired. Not only were the schools empty, but many of the building blocks were falling apart.

Most of the community secondary school had grass growing all over it. But Nkari youths cut down the field in front of the administrative block, which also housed the classrooms. They may have done this in preparation for the September school start, which never happened.

READ ALSO:  Dead is the former CAN chairman in Akwa Ibom

Same thing happened at Methodist School, Mbente, which is a primary school. The only difference is that it wasn’t completely empty, because the headteacher is the only teacher at the school, which has over 200 students in grades one through six.

It was also found out that some volunteers from the community used a classroom block in the school to teach kids whose parents were willing to let them go to school. 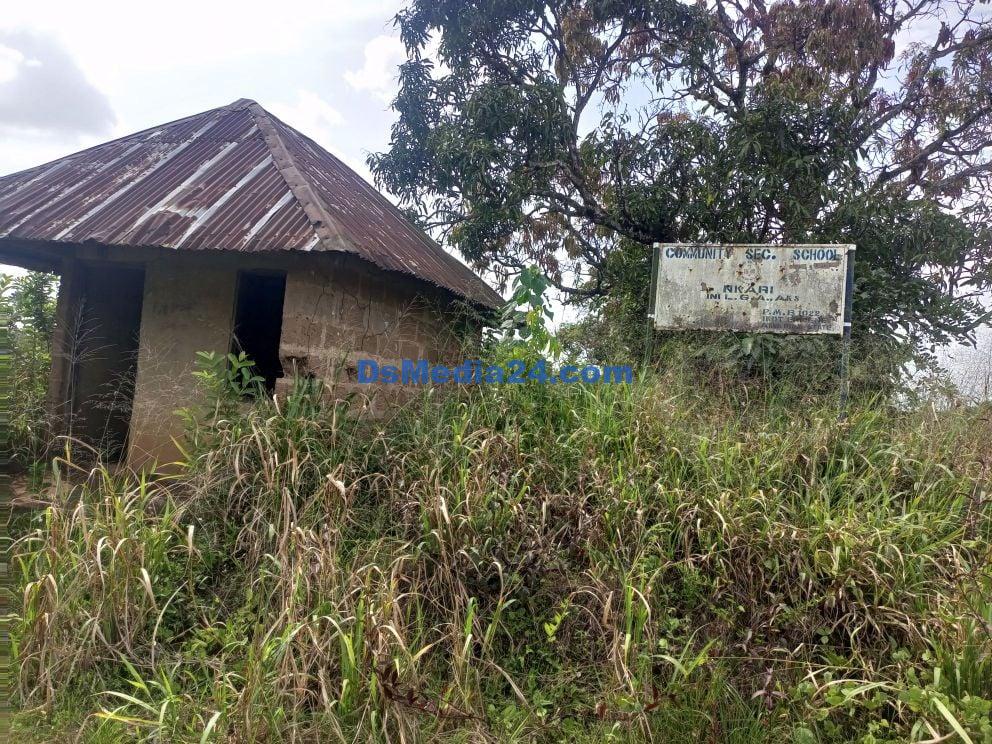 The village head, Ifa, and clan head of the Nkari community, Obong Martins Udo, talked about the boundary crisis and how it affected education in the community. He said that his people had suffered unimaginably because of the long-lasting crisis, which he said had shut down all parts of the community, especially education.

Obong Udo said that after peace came back, the only secondary and primary school teachers in the community refused to come back, even though the villagers had promised them they would.

He also said that the community cleaned up the school in preparation for classes to start again in September. Unfortunately, no teacher showed up, and a number of complaints sent to the State Education management board about the situation were ignored.

The monarch was worried about the future of the community’s young people because of the three-year academic blackout caused by the communal crisis. He also said that there was no sign of school activities starting up again because the teachers didn’t want to come back and the government didn’t have the political will to force them to.

The top leader said that Nkari is sitting on a time bomb because some of their sons have been tempted to join bad gangs and some of their daughters have gotten pregnant and given birth.

He said, “We have suffered for nothing, especially last May when we had a fight with our Igbo brothers.” On your way here, you saw a large area of land that has been built on. They caused problems, and many people died because of them. Thank God that He worked out a deal and we signed an agreement last year to at least calm things down.

“We have written several letters and sent several pictures of the school to the government asking them to send teachers here, but they haven’t replied.

“In September, a group of inspectors from Abuja came on what they said was a surprise visit. They said that classes would start back up before the end of this school year, but the first term is almost over and nothing has happened in the Secondary School. We went to finish cleaning up the school grounds.

READ ALSO:  Mike Bamiloye Explains to Married Men What Happens When You Are Abusing Your Wives

“Our kids are having a hard time. Now, our kids go to school outside the house. They go to Odoro Ikono in Mbiabong Ikot Udofia and other places that are very far away. They don’t have any care or supervision from their parents, so the girls are getting pregnant and the boys are joining bad gangs.

“If the school isn’t open, the future of our children would be ruined because the kids would become unruly and violent. But if they are in secondary school and move on to tertiary level, they would be trained. Our girls wouldn’t be at risk of getting pregnant.

“During the crisis, a lot of valuable school equipment was destroyed. If there had been security guards at school all day and night, it wouldn’t have been like that. So, we are crying. It’s strange that he hasn’t taught in a secondary school for three years.

Not only has the education system in Nkari taken a step back, but so have the roads.

The landscape is never good, and the only good thing about Nkari’s roads is that they are used for campaigns. During campaigns, each government, including the current one, has come to the community and promised to build the roads, but then they leave and only come back during the next campaign season.

Obong Udo complained to our reporter about how bad the roads in Nkari are, saying, “Even the roads are bad. If the road was good, people on motorcycles would use it. But the village doesn’t have a good road, which is a very big problem. We heard that the government planned to build this road, Mbiabong/Nkari/Mbente/Ohafia road.

“However, the dry season has begun and nothing has been done. The other axis, from the market area to my village, Ifa, along Ikot Ekpene, Umuahia Road, was in the budget for 2018, but nothing has been done. Only two and a half of the 13 pillars for that brick work have been built. We are in trouble. The Biafrans destroyed the other road, which had a bridge and connected us to Abia State. It has not been fixed up yet.

“We are just hiding because all of the communities in this clan are surrounded by Igbo people from Abia State.

“This part of Akwa Ibom is really bad, and the government isn’t doing anything to help. Since it was renovated, our only health center has no equipment or anything else.

Hon. Okon Joseph Akpan, Caretaker of Gateway to Nkari, also spoke. He said, “We have been in conflict with our Ikwuano neighbors in Abia State. Because of this, on May 20, 2020, they planned to join this community, but God said no, and it has been a big fight.

“We saw hell, and we were suffocated. We went through a lot of mental and emotional problems. We need the government to help us bring back our education and health, both in terms of staff and facilities.”

Mr. Utin Okon, Supervisor, Political and Chieftaincy, Ini LGA, said that some teachers sent to the school asked for a transfer, while others just didn’t show up.

He said, “The reason was that there was a crisis, but the crisis has been over for a long time.” The problem ended more than a year ago. We made a deal with the Commander of the Military Base in Ibawa that there would be no more problems. Since then, the young people have stopped making trouble and fighting. So, you see them coming here to clean up so that academic activities can start.

“We signed an agreement with Abia State. We have told everyone that they shouldn’t go on the land in question until the National Boundary Commission comes and draws the lines.

“Actually, I don’t want anyone to say that I own this place. I want it to be used as a Federal Government school, hospital, or anything else useful to the government. So nobody can say, “This is mine.”

“For the past seven years, I’ve worked with the LG Chairman to improve this community. I want the government to be involved in this neighborhood. We’ve never had a single person from this community in government, which is sad.

When asked what they want from the government, Okon said, “What we want now is for the government to send teachers to our school so that our children can get back to school.”

But in a conversation with Sir John Udoh, a member of the State Universal Basic Education Board (SUBEB), he said that the teachers who were sent to Nkari didn’t do their jobs because they were afraid of being killed.

He said that the board would set up a Disciplinary Committee to deal with teachers who were moved to different schools but refused to start working there.

Udoh also said that the SUBEB management was thinking about sending teachers from the Nkari clan to schools in the communities.

Mrs. Vitoria Osiri, an educationist and guidance and counseling worker at one of the private schools in the State, called the situation unfortunate and said she feared that the lack of education in the community would be more dangerous than the war itself. She asked the government to have the will to make sure that teachers posted to the schools stay and that their safety is guaranteed.