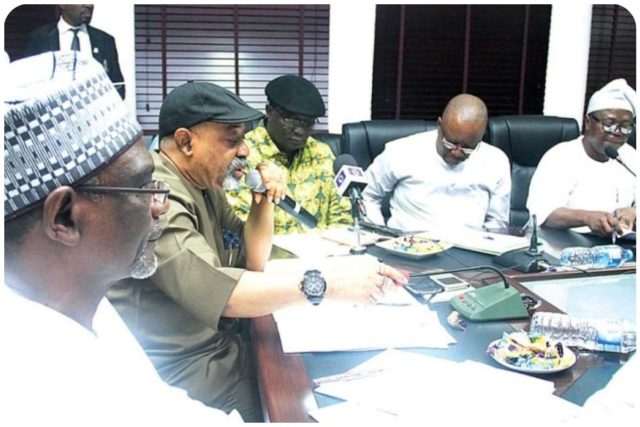 The Speaker of the House of Representatives, Femi Gbajabiamila, has come under fire from the Academic Staff Union of Universities (ASUU) for allegedly lying about his involvement in the earlier-in-the-year strike by university lecturers.

This came after the Speaker requested the union end its eight-month strike in October and provided a written guarantee that the government would fully balance the salary arrears owing to the union’s members.

The union’s president, Emmanuel Osodeke, expressed this viewpoint on Tuesday when he was asked to consider the speaker’s intervention and then the converse on their present disputes with the Federal Government.

He claimed in an interview with the Tribune that ASUU had a soft spot for the speaker and that this was the reason the union approached him for a meeting as a welcome intervention to break the impasse between it and the F.G.

Osodeke pointed out that Gbajabiamila even gave the ASUU leadership a document bearing his signature, demonstrating the government’s commitment to paying the outstanding members’ eight-month salaries in full.

He claimed that some of these worries stemmed from oddities in the contentious Universities Transparency and Accountability Solution (UTAS), including the house committee’s participation in budget distribution.

Osodoke claims that ASUU members applauded him for his intervention without realizing it was all a ruse, just as the rest of the world at the time did.

The Speaker hasn’t spoken anything concrete since then at least on the issues, let alone ensuring that his pledges are kept, Osodeke emphasized. “But here we are today, nothing has been done over the promise, and that is why,” he said.

READ ALSO:  Tinubu is cautioned against choosing Shettima or Zulum for the Muslim-Muslim ticket

By keeping his pledges to the union, he claimed, the Speaker would have to disprove ASUU’s assertion.

Osodeke claimed that ASUU members are simply continuing to work in the classrooms despite the poor treatment they are receiving from the government as a sacrifice for the sake of the kids, parents, and the nation as a whole.

He chastised the legal system for hastily rendering a decision in their dispute with the FG as the court postponed the subject until January 26.

He believed that given how sensitive the situation was, it ought to have been fully discussed, heard quickly, and resolved without undue delay.

However, he ranked the previous year as a very negative one for the Nigerian education sector, adding that the current administration had actually done significant harm to the industry.

He called the situation catastrophic and begged that the incoming administration will have the guts to proclaim a state of emergency in the area and clean up the disaster, which he estimated would take four to five years to clean up.