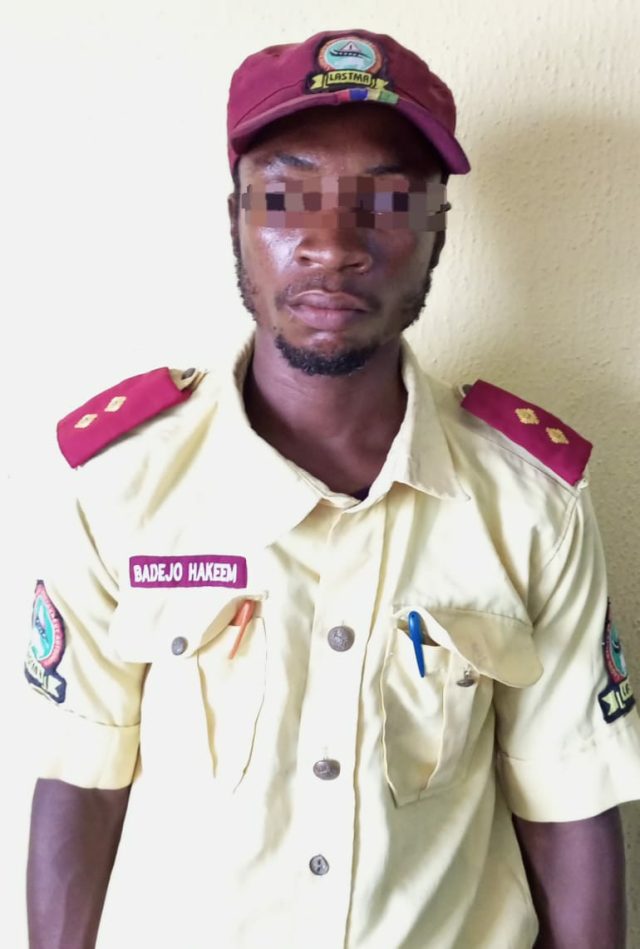 On December 14, a fictional traffic cop wearing the agency’s outfit was captured by the Lagos State Traffic Management Authority in the Lekki neighborhood of Lagos.

According to Mr. Adebayo Taofiq, Director of LASTMA’s Public Affairs Department, and Mr. Bolaji Oreagba, General Manager of LASTMA, the suspect was apprehended by a patrol team while they were on duty supervising and directing traffic close to the Lekki area of the state.

The 27-year-old suspect, David Oluchukwu, was apprehended when he was extorting money from local commercial bus drivers. He is suspected of being a member of a criminal group that preys on innocent motorists.

Taofiq stated: “The agency’s preliminary investigations showed that the arrested suspect belonged to a criminal gang and they have been extorting large sums of money from innocent motorists apprehended for various traffic offenses ranging from seat-belt, obstructions, illegal over-taking, and One-way at different locations across the State.

The suspect was detained after our patrol team noticed him collecting cash from various commercial bus drivers who were unlawfully dropping and picking up passengers under the Lekki bridge while fully outfitted in a LASTMA uniform and wearing a pair of black jeans.

“It is distressing that certain shady characters pose as LASTMA personnel and demand money from unsuspecting motorists, harming the Agency’s reputation in the eyes of the general public.

“The accused suspect, Mr. David Oluchkwu (27 years old), confessed to have impersonated a LASTMA official and demanded money from many drivers, mainly commercial bus drivers detained for breaking traffic laws around the state.

“Mr. Oluchkwu who came from ‘Ukpu’ in Anambra State admitted further to be making an average of N40,000 everyday from the illegal traffic industry.”

READ ALSO:  After being assaulted by a family friend, an 18-year-old girl reportedly takes her own life

In compliance with the Lagos State Criminal Code Law, the arrested suspect would be charged in court on Thursday (today), according to the Director of the Legal Department of LASTMA, Barr. Akerele Kehinde.