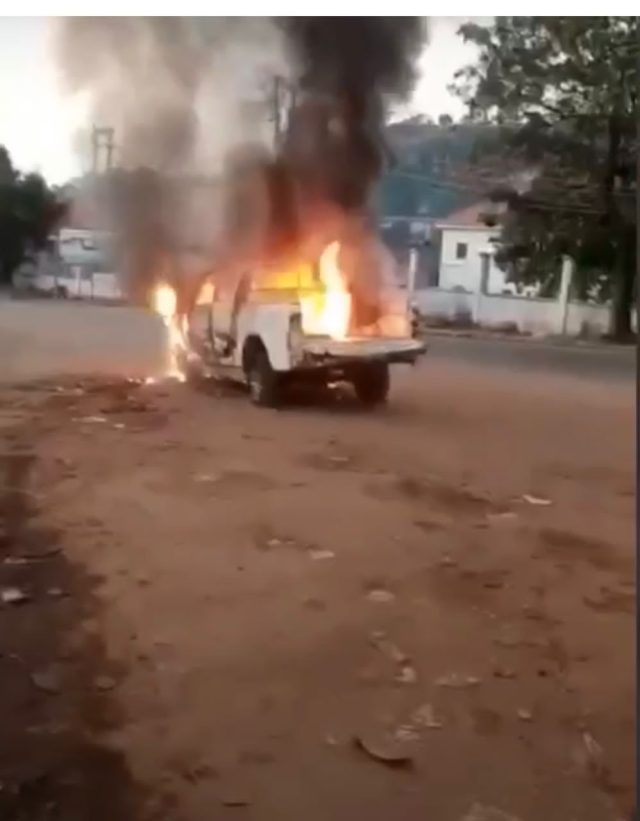 Following the minor chaos on Saturday morning brought on by intense firing in the Enugu city, further information has come to light.

Two people were killed earlier in the day as a result of gunmen attempting to impose a sit-at-home order in the new market area, according to DAILY POST.

An eyewitness who requested anonymity told our correspondent that the thugs shot two individuals during the incident and burned a police van on fire.

According to the source, the gunmen, who number over 10, entered the New Market area as early as 6am, likely with the intention of closing the market, but were met by some police officers who were patrolling the area to reassure vendors of their safety.

He claimed that after engaging the officers in a gunfight, the criminals were able to set their vehicle on fire.

In the meantime, Enugu State Command Commissioner of Police Ahmed Ammani said in a statement on Saturday that Area Commanders, Divisional Police Officers, and Commanders of all Tactical/Operational Units have been given orders to make the best use of the operational and intelligence resources at their disposal.

Under the pretense of executing an illegitimate sit-at-home order, the police officials also gave their personnel instructions on how to patrol effectively, catch miscreants, and disrupt the businesses and other activities of law-abiding individuals.

The Command has promised the CP that it will never stop working to defend residents’ lives and property from criminal elements hellbent on wreaking unjustifiable havoc on their fellow citizens, working in tandem with other security agencies and law-abiding individuals.

The Commissioner asked everyone to exercise caution, go about their lawful business, and avoid falling prey to the miscreants’ antics, particularly the dissemination of false information that stirs up conflict.

He urged locals to support and cooperate with law enforcement and other security organizations in their steadfast efforts to put an end to the criminal elements’ operations.

According to him, the New Market axis of Enugu has since returned to normal, and a crack team of police operators has been sent out to find the armed thugs who shot randomly and violated the local tranquility.