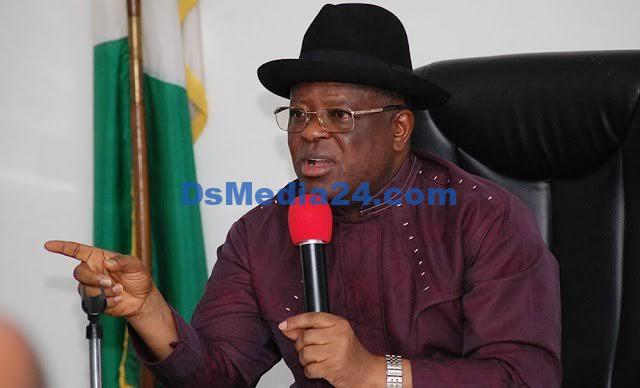 The All Progressives Congress (APC), which is now in power, was reprimanded by the governor of Ebonyi State, Dave Umahi, for indiscriminately placing campaign signs throughout the state.

According to a statement by Uchenna Orji, the state’s commissioner for information and orientation, the ruling party violated the state’s Executive Order 3 of 2022.

The commissioner asserts that by taking this step, the state legislature is attempting to set an example.

According to the announcement, “His Excellency the Governor has decided to use his Political Party APC to make an example and as such, APC is therefore fined the sum of Five Million Naira (5,000,000.00) for contravening the Laws and Executive Order of the State.”

Before December 31, 2022, “APC must pay the money to the State IGR account, acquire an IGR receipt, and publicize the payment in all media channels, including social media, or risk being forced to pay a default cost of Fifty Million Naira (50,000,000.00).”

“APC is required to remove all of its posters during this time and repair the infrastructure before December 31, 2022. The Governor has made the decision to pardon all other political parties and issues an urgent warning to them not to deface State property before December 31, 2022, or they will suffer the same sanctions as the APC, Ebonyi State Chapter.

“The Governor appeals to all Political Parties not to take this goodwill as a sign of weakness on the part of Government as Government will seal off all Secretariats/campaign offices of such parties for their failure to remove their posters and or desist from continuously pasting posters on such critical Infrastructure,” reads the statement from the governor.

READ ALSO:  No one is completely healthy, so quit being petty, Tinubu tells Nigerians

Political parties are forbidden by Executive Order 3 from engaging in political activity without first requesting and receiving the necessary permission from the state government.

The ordinance, which the governor signed in November, forbids political parties from affixing posters on vital infrastructure without first receiving permission from the state.