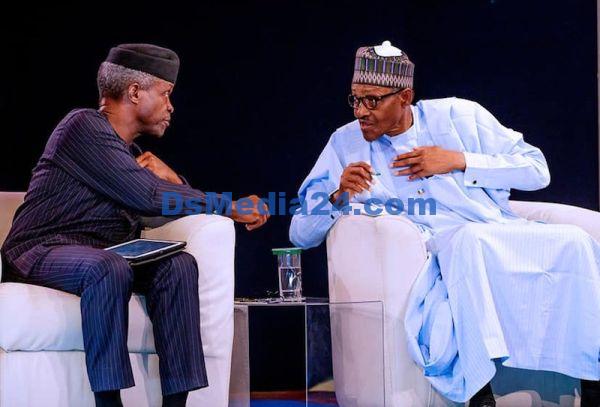 According to Vice President Yemi Osinbajo, President Muhammadu Buhari will make a terrific entertainer after his administration.

This was said by Osinbajo on Friday as he was proposing a toast for Buhari at a special dinner held at the State House Banquet Hall on his behalf by his family and close friends to celebrate his 80th birthday.

He cited the President’s “sense of humor,” recalling how the President would make jokes to defuse the situation and get him to change his mind about sending a letter to the Economic and Financial Crimes Commission to ask them to look into corruption claims made against him.

“Mr. President is a really funny man, and I believe that when he retires, he will have a very successful career in entertainment. I went to him one day since I was the subject of certain accusations. I went to him to show him the letter I had sent to the EFCC requesting an investigation since I was so furious with him.

He took a look at it and then turned to face me, calling me either VP or Professor, depending on his mood. “VP, why do you worry yourself about all these people?” he questioned this time. These folks basically fabricate all kinds of unfounded accusations and fabrications, including the claim that I am preparing to be married once more. Even some stupid individuals were hanging out at the National Mosque, waiting for me to arrive and be married once more, he claimed.

“I invite your excellences, ladies and gentlemen, to join me in proposing this toast to an exemplary leader, a forthright and honest man, a good and kind man, and a man who has led this country with great courage, determination, and commitment for so many years,” Osinbajo said in praise of Buhari for his “great courage and commitment” in leading the country.

We pray that the Almighty God preserves his life for a very long time to come and that he spends the entirety of that time in good health, peace, joy, and the love of all of our countrymen.

Buhari has stated he won’t miss the Aso Rock Villa much because of the persistent persecution he receives from some Nigerians who disparage his attempts to improve the nation.

He added that despite his best efforts, they do not seem to be sufficient.

In a video that was shown during the meal, Buhari commented, “I wonder how much I’m going to miss. I feel like I’m being bullied. Even when I think I’m giving it my all, my efforts are still insufficient. Because there are others nearby who believe they can frighten me into giving them what they want rather than using certain procedures to achieve whatever they want to obtain. And there are some people who aspire to intelligence.

Atiku Bagudu, the governor of Kebbi; Aminu Masari, the governor of Katsina; Kayode Fayemi, the former governor of Ekiti state; Boss Mustapha, the secretary to the government of the federation; Ibrahim Gambari, the president’s chief of staff; and other business leaders, including Nduka Obaigbena, the chairman of AriseTV and the Thisday Group.