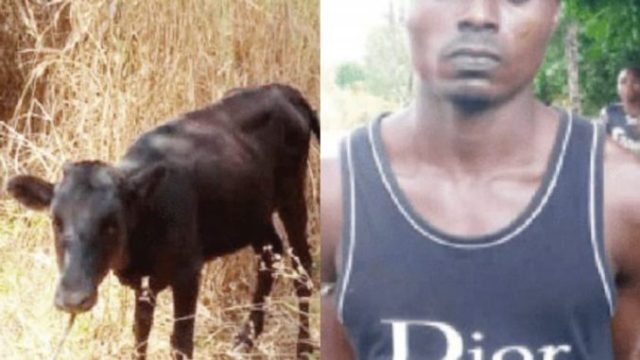 Police from the Ebonyi State Police Command caught a young man named Ikenna Ogbonna Ota from the Azuoto Okpoitumo community in the Abakaliki Local Government Area of the state. He was accused of stealing a cow.

Ota was caught stealing and giving a stolen cow to his late father-in-funeral law’s as a gift.

People of the Izzi clan in the state have a tradition of burying their dead relatives, especially parents and in-laws, with cows. This is done so that the people won’t think badly of them.

The Point said that Ota went to the home of his in-laws on Friday to give them things for the funeral of their late father.

He had stolen a female cow from his community and brought it with him to the ceremony.

Unfortunately for him, Thomas Agbo, the owner of the stolen native cow, visited the family of the dead man because he felt bad for them. He was able to tell that the cow the son-in-law gave him was his missing cow and called the police.

Agbo said he went to the bush to check on the cow four days before the funeral of his neighbor’s father-in-law, but he couldn’t find the cow where it was tied.

He said that he was surprised to see the stolen cow when he went to Ebia Unuphu Community to comfort Okemini Oyibe’s family.

Agbo said that he saw the cow tied to some Fulani cows for a ritual presentation.

“My neighbor is Ikenna Ogbonna Ota. I knew that his father-in-law had died and that he would be buried on December 9. One of my cows ran away a few days before the ceremony.

READ ALSO:  After a year and a half in Boko Haram's captivity, an ABU student regains his freedom

“My children tried hard to find it, but they couldn’t,” he said. “By chance, I saw it being given to Ebia Unuhu by Ikenna for the funeral of his father-in-law.”

When the suspect was questioned, he said he didn’t steal the cow.

He said that he bought it for N110,000 (only one hundred and ten thousand naira) from a man named “Mr. No Time” in the village of Azu-Ebonyi, Amachi Unuphu, which is next to Azuoto Okpuitumo.

The police said that after the investigation, the suspect would be taken to court and charged.