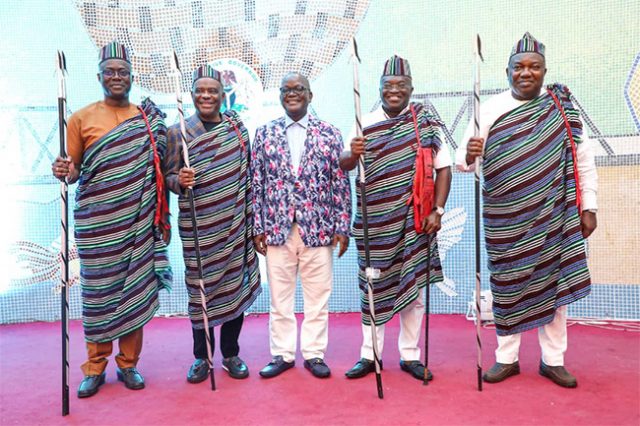 Five governors of the Peoples Democratic Party (PDP) known as G5 stormed Makurdi, the capital of Benue State, on Monday to attend the inauguration of a few projects that Governor Samuel Ortom had started and finished.

The 2.1-kilometre Township Road, also known as the Nyesom Wike Road, was one of the projects that were officially opened on Monday. It was built by the Ortom administration.

The road, which is behind the Commissioner’s Quarters in Makurdi and which leads to Ayu’s house, was inaugurated by a former governor of Benue, Gabriel Suswam.

Before the inauguration, the G5 took time to address PDP supporters at a rally organised to drum support for all PDP candidates in Benue including the Speaker of the Benue State House of Assembly and PDP governorship candidate in the state, Titus Uba.

At night, Wike stated that the PDP G5 are bonded to save Nigeria and nobody can break their ranks in their continued insistence that Ayu should resign as the national chairman of the party.

“People have tried to see how they can break us, you cannot. We are bonded to save Nigeria.

“That is why when you see all of us, we are impenetrable. Nobody can divide us. They have tried everything in this world to divide us, but no way.

“The way we operate; I will talk, we have people who don’t talk. You may be underrating them. By the time they will shock you, you will think it is Wike, it is not Wike you are seeing,” he said.