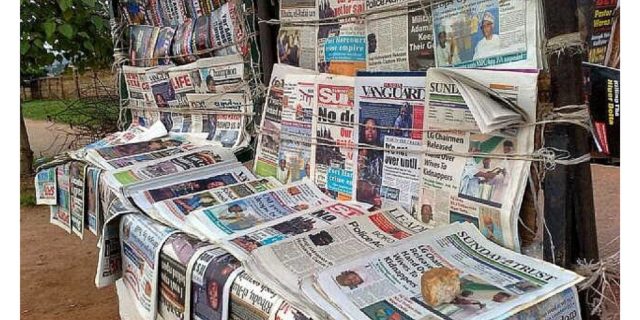 People who sell newspapers in Anambra State have protested what they say is a ban on newsstands by the State government.

The vendors said that the ban was a violation of the freedom of the press rights of the people.

They said that government agents were bothering them every day, asking them to rent shops or offices where they could sell their newspapers.

Esther Godwin, a woman who sells things at Aroma and talked to reporters, said that some government agents came to her newsstand and told her she couldn’t sell newspapers there after next week. When she asked them why, they said it was Governor Soludo’s decision.

She said, “Even though London and the United States have changed, people still sell newspapers at newsstands.” Why does Soludo tell us to rent offices from which we can sell newspapers?

“Where would the money come from to do that now? We’re going to complain to the Commissioner for Information, and if that doesn’t help, we’ll go to the State House of Assembly and ask for Soludo’s removal.”

In the meantime, a Mass Communication professor who spoke to our reporter in confidence called the rumored ban on newsstands in the State “executive madness.”

He said that selling and distributing newspapers were important parts of a free press in a democratic society and that taking away the vendors’ power in any way was unfair and against the principles of constitutional democracy.

“The media are very important to the growth of a democratic society. This is something that most people in developed societies agree on, to the point where the media are often called the “Fourth Estate of the Realm.”

“Like other democracies, Nigeria understands the role of the media and has even written it into the constitution. The Nigerian Constitution of 1999 not only gave every Nigerian the right to free speech and the right to own, start, and run any medium for spreading information, ideas, and opinions, but it also made it the media’s job to keep an eye on the government and hold it accountable to the people.

“Section 39 of the Constitution says, ‘Every person shall have the right to freedom of expression, including the freedom to hold opinions and to receive and share ideas and information without interference.'”

“Section 22 of the Constitution says that the press, radio, TV, and other forms of mass media must always be free to support the basic goals in Chapter 2 of the 1999 Constitution and the government’s responsibility and accountability to the people.

“So, only a government with something to hide or fear would want to stop vendors from distributing newspapers and other magazines.”

The Commissioner for Information, Paul Nwosu, was called several times, but his phone line was always busy.