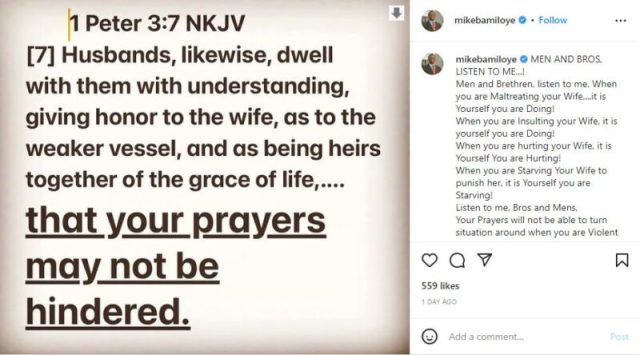 Mike Bamiloye, a Nigerian evangelist and the founder of Mount Zion Ministries, has warned men to quit abusing their spouses, according to IGBERETV.

Bamiloye claimed on his Instagram account that abusive husbands are merely “doing” themselves. He added that some men’s unfavorable attitudes toward their wives are the cause of their prayers not being answered.

The text of his post is, “MEN AND BROS, LISTEN TO ME…!
Men and Brothers, pay attention to me. When you mistreat your wife, you are actually doing it to yourself.

You are the one who is insulting your wife, not her!
When you harm your wife, you actually harm yourself.
When you starve your wife to punish her, you are actually starving yourself.
Pay attention, Bros & Men.
When you are violent, inhumane, unconsiderate, and unloving to the wife of your youth, your prayers won’t be able to change the situation.
All night long she cries, and you don’t even notice.
You don’t even look in her direction, yet her heart is in excruciating pain.
You leave her at home alone with three or four kids while you travel from coast to coast on business and for pleasure.
You are merely depositing money into a bank of impending disaster.

And you fully capitalize on your withdrawals.
Your rewards are impossible to miss.
YOU ARE THE ONE DOING IT!
Congratulations on mistreating the wife you swore to love and cherish in sickness and in health, for better and for worse, in the presence of God and the witnesses of the church. Clap for yourself.
DOING IT YOURSELF IS YOU.
You are acting on your own own.
If you continue to act in this way, your prayers will be hindered, according to I Peter 3:7.
YOUR PRAYERS WON’T RECEIVE A RESPONSE.
40 Prayer Points That Killed Goliath won’t be of any use to you if you don’t respect and love your wife.
As a result, if you find that things are getting increasingly difficult for you, you find yourself unexpectedly demoted at work, or your behavior suddenly becomes erratic and confusing.
You start to flee from pillars to posts, travel from prayer cities to prayer mountains, and a fake prophet informs you that there is a witch in your home who has turned your life upside down. At this point, things have become unbearably difficult for you.
Look not too far.
It is the Witch that you crafted yourself.
one that you produced in your “factory of inconsiderate attitude.”
Your prayers are being hindered by your negative attitudes toward your wife, according to the Word of God, which is what is happening to you.
Not at all a witch, she
The Wizard you are!
I arrive quietly.
#mikebamiloye” 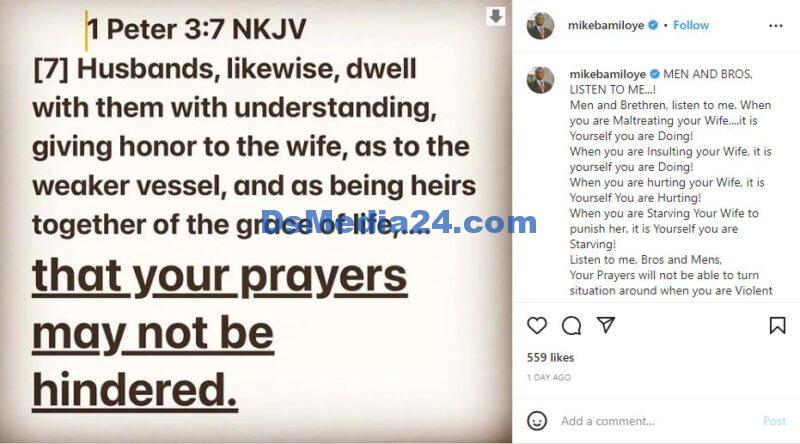