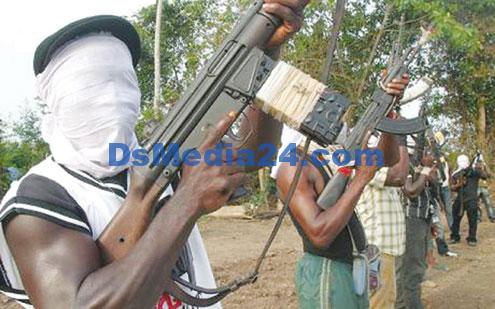 Kidnappers are currently “besieging” the communities of Oke-Ata, Soyoye, Ibara Orile, Rounder, and others in the Abeokuta North Local Government Area of Ogun State.

People in the affected areas, like those near the Alamala Army Barracks, seem to have turned to faith because they are afraid that they could be taken by kidnappers at any time.

When talking to our reporter, some of the locals said they were worried that the kidnappers, many of whom have high-tech rifles, have become so confident that they no longer fear security agents and will kill or hurt anyone who tries to fight back.

The DAILY POST found that the people who kidnap people for ransom always dress in military camouflage to hide their identities and trick their targets.

People have also started moving out of the affected areas and into other parts of Abeokuta, according to reports.

“Some of our people in these places have already started to move. The people who used to live here no longer want to. We can’t say we blame them, because why would anyone stay in an area where they could be taken at any time?

“We don’t know where to go or what to do because we are renters. We have asked the police, the Amotekun Corps, the So-Safe Corps, vigilantes, and all of them to help. Still, they have been doing their best, but it looks like they are too busy. A homeowner in the area said, “I’m afraid some landlords will give up their homes so they can move out there and become renters.”

READ ALSO:  Insecurity: Ogun So-Safe sends out 1,000 men for Christmas and tells cultists to be careful

A message that was going around on social media said, “The rate at which kidnappers are taking innocent people from Oke-Ata, Ibara Orile, Soyoye, and the surrounding areas is getting worse every day.”

“The people who kidnap are now making it their business to take innocent people from Oke-Ata, Ibara Orile, Soyoye, and nearby areas and demand huge ransoms.

“It has also been proven that the kidnappers do their bad things where there are bushes, which they use as hiding places, escape routes, and places to talk to the families of their victims for ransom before the victims can be set free.”

So, a resident of Oke-Ata has called the attention of the Baales and Chairmen of all Community Development Associations in all areas with bushes, telling them to tell the owners of the abandoned lands and unfinished buildings to come and start working on their land within one week, and asking the local and State governments to do something.

The kidnappers at Isaga/Ilewo-Orile killed Muhammed Oke, who was the leader of a group of vigilantes.

The vigilante boss was shot dead Thursday night after he reportedly got a call from nearby residents telling him that gunmen had been seen in a bush.

On Friday, a woman was taken from the car of a lawyer in Soyoye by unknown gunmen.

It was thought that the incident took place at the lawyer’s front door.

A road in the Soyoye community connects Ayetoro to Isaga, Ibara-Orile, and the Sokoto road. In the last year, ransoms of millions of Naira were paid to get back policemen, doctors, teachers, traders, religious leaders, and many travelers who had been taken hostage.

We know — The Ogun police say
Abimbola Oyeyemi, who is in charge of public relations for the Ogun State Police, told DAILY POST that the police are aware of what is going on in Abeokuta North.

Oyeyemi said, “We have broken up some of them, but other gangs are still going strong, and we are working hard to break up those gangs.”

Oyeyemi said, in response to the claim that the number of kidnappings is going up even though the police are doing more, “People won’t appreciate what you’re doing until they start seeing results. When we get the results we want, many people will be glad we did what we did. We won’t tell everyone everything, but when we get to the bottom of the whole thing, people will be grateful for our work.”

Oyeyemi told the people in the area to be careful and asked them to set up security awareness groups in their neighborhoods and hire local vigilantes to call the police when necessary.

Akinremi, a former Commissioner of Police, told our reporter that the police force is doing its best to “stop the bad guys’ plans.”

Akinremi said, “We are gathering important information, and we are bringing the battle to their doorstep.”

He said that the kidnappers are working in the areas listed because most houses are still in the bush and not all of the land has been built on yet.

“The towns are still growing, and the houses are spread out and hidden by bushes. Also, you can’t get to the roads. If you see one house, you won’t see another one for 200, 300, or 500 meters. Even when they are in trouble, their neighbors won’t help much or at all, and security agents won’t hear about it.

“We’re working with other security agents, and we’ve told people in writing to be more aware of their safety. Agents of security can’t be everywhere at once. We’re gathering information, and we’ll get to them very soon,” he said.