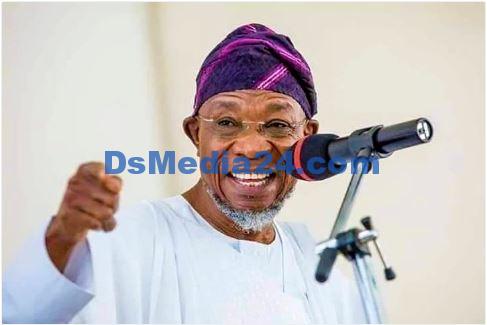 Interior Minister Rauf Aregbesola sent a letter to the Nigerian Governors Forum asking for a meeting to talk about making the country’s jails less crowded.

Sola Fasure, who is the Minister’s media adviser, told our correspondent about this on Tuesday.

Aregbesola said he will meet with the governors of the states in exactly one month to reach a deal on the release of at least 30% of prisoners across the country.

He said that the number of federal offenders in the system was much less than 10% and that most of the people in jail had broken state laws.

Aregbesola said that this meant that they were still subject to the laws of their own states.

The minister also said that the nation’s 253 jails needed to be emptied out because some of the people in them didn’t need to be there.

But when Fasure talked about what the minister did, he said:

“The minister has written to the Governors Forum, but he hasn’t met with them yet because they need to talk to him and give him a date.”

“He wrote to them and asked to meet with them, but he hasn’t heard back from them yet. That is, the meeting hasn’t happened.”

Also, on Tuesday, the Federal Government said that over 12,000 prisoners were let out of prisons across the country in the last six years as part of a policy to make prisons less crowded.

Abubakar Malami, the Attorney General of the Federation and Minister of Justice, told members of the Senate Committee on Judiciary, Human Rights, and Legal Matters this during a session with the committee to defend the 2023 budget.

Malami made this statement in response to a question from Senator Ajibola Basiru (APC Osun Central). He said that the Federal Government was able to clear out prisons across the country with policies other than the Administration of Criminal Justice Act, which was meant to speed up the justice system.

“When this government took office in 2015, the problem of overcrowded prisons was at the top of the national agenda. This led President Muhammadu Buhari to set in motion a number of different plans to solve the problem.

“One of the things that were set in motion was a presidential committee for clearing out prisons. This committee talked to other people in the justice system to find a way out.

“In addition to the committee, Mr. President wrote letters to the governors and chief judges of the 36 states, asking them to visit prisons and use their prerogative of mercy when necessary.

“During one of these visits, the Governor of Kano State, Abdullahi Ganduje, granted pardons to about 500 prisoners in one day. In total, these visits have led to the release of more than 12,000 prisoners across the country in the last six years.”

“Special attention was paid to people waiting for their trials, who make up most of the people in prisons across the country. Magistrates and Judges were sent to the prisons to do justice there and then.

Earlier in his speech, the Chairman of the Committee, Senator Opeyemi Bamidele (APC Ekiti Central), said that President Muhammadu Buhari’s Appropriation Bill shows that the Federal Ministry of Justice and its agencies will have a budget of N71.291 billion in 2023.