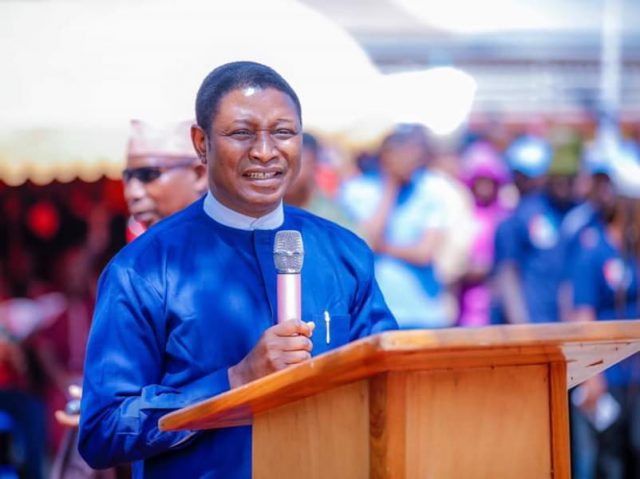 The Nigerian Christian Pilgrim Commission’s Executive Secretary, Rev. Yakubu Pam, has received a letter from the Civil Rights Action Against Corruption (CRAAC) requesting his resignation and turning himself in to the nation’s anti-corruption organizations.

The group charged the NCPC leader with tearing down Christianity in Nigeria under the pretense of carrying out his official duties in the letter that was made available to DAILY POST.

They informed the NCPC Executive Secretary that since his appointment on July 4, 2020 by President Muhammadu Buhari, he has instead engaged in acts that are hostile to Christian evangelism, rather than edifying the body of Christ as expected of the exalted office. As a result, those to whom the faith should have been made attractive are now impossibly revolted by your conduct, which currently borders on apostasy.

The group’s letter, which was signed by Robinson Edeh, the national coordinator, claimed that the most recent instance of such behavior was the “charade you reduced the sacred body of Christ and the Christian Pilgrims Commission into when you led 121 people on a trip you packaged as a pilgrimage to pray for the upcoming elections and restoration of security in Nigeria; your trip was comically also used to discuss the national politics.”

This irresponsible junketeering sparked righteous public outcry both inside and outside of Christendom, and your ill-advised defense of it is a transparent untruth that has no place coming from a man claiming to be a minister of Christ. You were only able to make an attempt at justifying yourself in this situation because Nigerians who were criticizing your misconduct lacked all the information.

They will be horrified to learn that the rest of the delegation consisted of your relations, political allies, business partners, mistresses, and their friends and family, with the exception of the Secretary to the Government of the Federation (SGF), Boss Mustapha, and a small number of State officials.

“This basically suggested that the NCPC-funded vacations of half the delegation were taking place.

“The other half of the delegation were on the trip, not for the purposes you advertised, but to consider your political aspiration of securing the position of Vice President of the Federal Republic of Nigeria by force, as the only route to it for you is an ongoing campaign to be hand-selected as a mitigating factor for the Muslim-Muslim ticket of the ruling All Progressives Congress,” the delegation leader said (APC).

“Facts have now come to light indicating that you and your political allies went on that trip with the intent of destabilizing Nigeria if you didn’t get your way.

Since you sent these persons on a personal assignment rather than a national one, you should in effect reimburse the government for the funds used to pay for the delegation’s airfare and estacodes.

“It’s bad enough that you’re sinning against the nation, but this crime is made worse by your manipulation of the entire Commission Board to join you in degrading the location that you were hired to improve.

“On the administrative side, it is saddening to learn that while managing the Commission, you have repeatedly violated the Public Procurement Act.

“Vendors and contractors are chosen from a circle consisting of your associates, friends, and relatives, similar to how you choose those who embark on pilgrimage.

“The numerous occasions in which you overruled the Commission’s civil officials are clearly documented and would count against you if you were ever put on trial.

CRACK is worried that you are attempting to destabilize Nigeria with the money from this scam.

It would be fascinating to see what more information law enforcement officials and the intelligence community would unearth given that they have already linked your financial connections to some of the destabilizing concerns related to the Muslim-Muslim ticketing.

“However, we do not believe it is worthwhile to wait until after your tenure for your arrest, prosecution, conviction, and punishment. Because NCPC is a Christian-oriented organization, leadership should be demonstrated by example, and corruption should not be tolerated there.

“Due to the numerous violations you have committed, we are requesting that Reverend Yakubu Pam immediately resign from his position as Executive Secretary of the Nigeria Christian Pilgrim Commission (NCPC).

We further demand that after your resignation, you present yourself to the appropriate law enforcement and anti-corruption organizations.

“We are very interested in figuring out these specifics, therefore we’re going to urge that the country’s anti-graft organizations look into the NCPC’s finances from 2016 to the present, which calls for you to step aside to avoid obstructing the investigation.”

If you don’t resign within seven days of receiving this letter, CRAAC will start ongoing protests at the Presidential Villa, the Secretary to the Government of the Federation’s office, the NCPC office in Garki Abuja, the EFCC headquarters in Abuja, and the Independent Corrupt Practices and Related Offences Commission (ICPC) headquarters in Abuja on Monday, October 31, 2022.

“CRAAC is adamant that the fight against corruption in Nigeria must start in the temple of God, which the NCPC represents. Awaiting your intervention to spare the country from more disgrace by dragging the NCPC through the mud. Please accept our best wishes as an assurance.