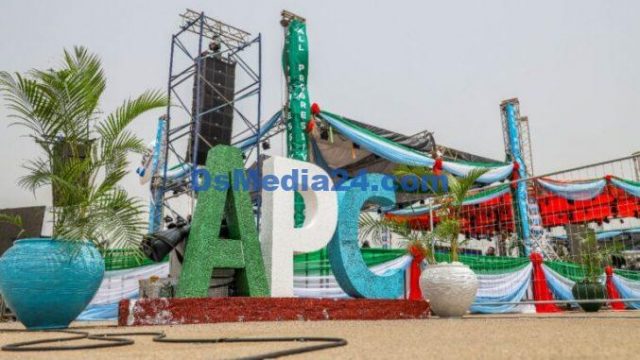 Yemi Sanusi, the APC’s Ogun State Chairman, has been hauled before an Ijebu-Igbo-based State High Court in connection with the party’s Ward Congress held on July 31, 2021.

Hon. Sulaimon Olalekan Bude, Prince Banji Adesegun, and Hon. Bola Lamina, the petitioners, are contesting the Ogun State APC’s inability to swear them in as the legitimately elected party chairmen for Wards 9, 10, and 11, respectively.

The applicants are asking the court to recognize them as the winners of the Ward Congress in each of their individual wards in Ijebu North, according to the lawsuit, HCB/34/2022, filed by their attorneys, Prof. Justus Sokefun, Victoria Fekumo, and Abraham Sokefun of Justus A. Sokefun & Co.

On behalf of himself, the second and third applicants, as well as the first applicant, Bude, it was stated in an affidavit that:

“We are the Chairmen of our respective Wards and represent Wards 9, 10, and 11 of Ijebu North Constituency II.

“We were duly elected in the party Congress that was conducted at the Ijebu North Constituency II on July 31, 2021, in our respective Wards.

“The First and Second Respondents have failed, refused, and omitted to swear us into our respective offices as Ward Chairmen since the election,” the complaint reads.

READ ALSO:  Tinubu receives a major boost ahead of the 2023 elections as PDP members switch to the APC

They asserted that Sanusi and Oladidupo had instead identified the third through fifth respondents as the APC Ward Chairmen for Ijebu North Constituency II’s Wards 9, 10, and 11.

notwithstanding the fact that the results of the ward elections held on July 31, 2021 indicated that we should have won,

The third through fifth defendants, according to the applicants, have been misrepresenting themselves as the Ward Chairmen, depriving them of their rights, obligations, and responsibilities as the Chairmen of their respective wards.

They concluded that, although being an internal party matter, the respondents’ ongoing behavior “amounts to a violation of our civil rights as party members.”

The applicants ask the court to decide the following in their prayers:

“Whether or not the court has the authority to decide the case.

“Whether the Respondent’s ongoing actions constitute a violation of the applicants’ rights?”

Whether the third through fifth respondents who are being introduced as the new ward chairmen have any proof of winning the elections.

However, in a notice of preliminary objection submitted on their behalf, the Respondents asked the court to dismiss the action due to lack of jurisdiction. This motion was made by the Respondents’ attorney, Chukwudi Maduka of Afe Babalola and & Co.