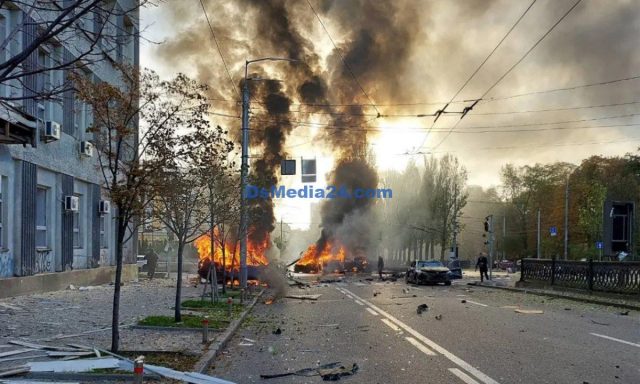 As a result of numerous missile strikes on Kyiv, the capital of Ukraine, this morning, at least eight people have died and 25 have been injured.

As officials claimed that the missiles had struck close to a well-known memorial to a prominent statesman, a park, and a pedestrian bridge, Daily Mail got videos and images from the Ukrainian capital showing burning cars and bodies in the streets with the main target appearing to be civilians.

The central Ukrainian city of Dnipro and Zaporizhzhia were also damaged, according to President Zelensky.

According to certain sources, explosions have been verified in the city of Lviv in the far west.

As the strikes were taking place, Zelensky declared that “Russia is trying to wipe us off the face of the earth.”

Although Russia did not immediately provide an explanation for the strikes, many people feel that they were a kind of retaliation for the weekend fatal explosion that devastated the Kerch Bridge connecting mainland Russia and Crimea.

In response to the explosion on the Crimean bridge, Putin attacked Ukraine and called it a “act of terrorism.”

Total
Shares
Share
Tweet
Pin it
Share
READ ALSO:  Netizens respond to an old video of Atiku saying that he has stopped getting close to women. [VIDEO]