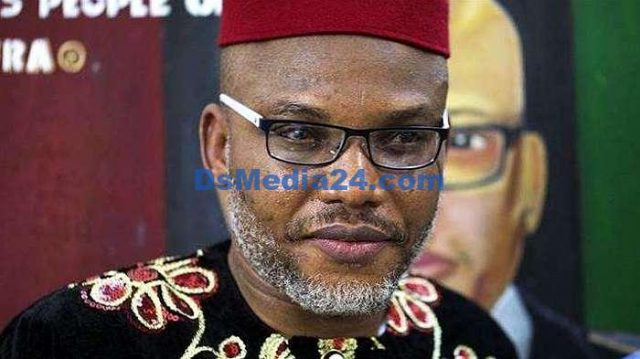 The leader of the illegal group Indigenous People of Biafra (IPOB), Nnamdi Kanu, was found not guilty and released.

The Abuja-based Appeal Court let Mr. Kanu go free on Thursday. He had been in jail for several months.

“Appeal was granted, and Onyendu Mazi Nnamdi KANU was released and found not guilty.

The judge did say that counts 1, 3, 4, 5, 13, and 15 showed that the IPOB leader was accused of some things and that the trial of the defendant would go forward based on those counts.

Kanu’s lawyer, Mike Ozekhome SAN, filed the suit with Appeal No. CA/ABJ/CR/625/2022 to challenge the remaining seven-count charges against Kanu. He asked the Court to throw out the remaining charges.

The panel, which was led by Justice Jummai Hannatu Sankey JCA, decided to wait until today to make a decision.

Charges from the FHC, Abuja, Were Kept

Count 1: The prosecution said that Mr. Kanu, of Afara Ukwu, Umuahia North Local Government Area of Abia State, as a member and leader of outlawed IPOB, did an act of terrorism against Nigeria and its people in September 2021. They said that he made a broadcast that was heard in Nigeria and was meant to scare the people there. In the broadcast, he said that the people would die and the whole world would stop. Section 1(2)(b) of the Terrorism Prevention Amendment Act 2015 says that this is a crime that can be punished.

Count 3
The prosecution also said that Mr. Kanu said “on different dates” between 2018 and 2021, within the court’s jurisdiction, that he was a member and leader of IPOB, which is illegal in Nigeria.

READ ALSO:  PDP Crisis: Atiku On Wike's Choice As Running Mate: Wike Is Our Jagaban, A Man Of Revolution

The prosecution said that this was a crime against section 16 of the Terrorism Prevision Amendment Act 2015 and that there were punishments for it.

Count 4: M. Kanu is also accused of making a broadcast that was heard and received in Nigeria on different dates between 2018 and 2021. This broadcast allegedly encouraged people in Nigeria to hunt and kill Nigerian security personnel as part of an act of terrorism against Nigeria and its people.

Section 1(2)(h) of the Terrorism Prevention Amendment Act 2013 says that this is a crime that can be punished.

1(2)(h) of the Terrorism Prevention Amendment Act 2013 says that this is a crime that can be punished.

Count 13: Between 2018 and 2021, Mr. Kanu allegedly sent out a broadcast that was heard and received in Nigeria with the intent to start a fight, as part of an act of terrorism against Nigeria and its people. The broadcast told people to burn down every federal building in Lagos, which cost the federal government a lot of money.

Section 1(2) of the Terrorism (Prevention) Amendment) Act 2013 says that the alleged crimes are punishable.

Court 15
The prosecution also said that between March and April 2015, Mr. Kanu illegally brought a radio transmitter called Tram 50L into Nigeria and kept it in Ubulisluzor, which is in the Ihiala Local Government Area of Anambra State. He said it was a container of used household items.

READ ALSO:  The budget for the State House Clinic, which the president has never used, goes up by N394 million for 2023

It was said that the alleged crime broke section 47(2)(a) of the Criminal Code Act CapC45 Laws of the Federation of Nigeria 2004.

But in the appeal, which was signed by Kanu’s lead lawyer Mike Ozekhome SAN, he asked the Court of Appeal in Abuja to throw out the other charges against him and let him go.

1. “The Learned Trial Judge erred in law when he failed to consider, make findings of facts, and rule on issue one raised for the trial Court to decide, relating to the extraordinary rendition of the Appellant, and this caused a miscarriage of justice.”

2. The trial judge did not follow the law when he said, “The defendant is being charged under Section 1(2) of the Terrorism Act, which has been copied above. Any crime alleged to have been committed “within” or “outside” Nigeria can be brought under the Act,” which led to a “miscarriage of justice.”

3. The hard lesson The judge made a mistake in the law when he said that the status of the Indigenous People of Biafra as a proscribed organization is a matter before the Court of Appeal, but that as long as the appeal has not been decided, the order of court proscription is still in effect until it is overturned. This was a mistake in the way justice was done.

4. The lesson learned Judge broke the law when he used the power given to him by Section 216(4) of the Administration of Criminal Justice Act, 2015, to change Count 15 of the charge on his own. Count 15 is based on an allegation of importing a radio transmitter in Ubulu-Isiuzor in the Ihiala Local Government Area of Anambra State. The judge then went on to assume jurisdiction over crimes that were allegedly committed outside of its territorial jurisdiction, which led to a misc

READ ALSO:  The IPOB group cautions Simon Ekpa that "enough is enough" about the sit-at-home directive

The reliefs that were asked for were: 1. An order from this honorable court granting the appeal and overturning the learned trial court’s decision in its entirety, while keeping counts 1, 2, 3, 4, 5, 8, and 15 of the amended charge.

2. AN ORDER OF THIS HONORABLE COURT, UPON GRANTING RELIEF A ABOVE, DISMISSING THE REMAINING COUNTS 1, 2, 3, 4, 5, 8, AND 15, AND, ACCORDINGLY, RELEASING THE APPELLANT ON THOSE COUNTS.

3. An order from this court ending the whole charge and letting the person who filed the appeal go free.

4. AND FOR SUCH FURTHER ORDER OR ORDERS AS THE HONORABLE COURT MAY DEEM FIT TO MAKE IN THE CIRCUMSTANCES OF THIS APPEAL.

The case was heard.