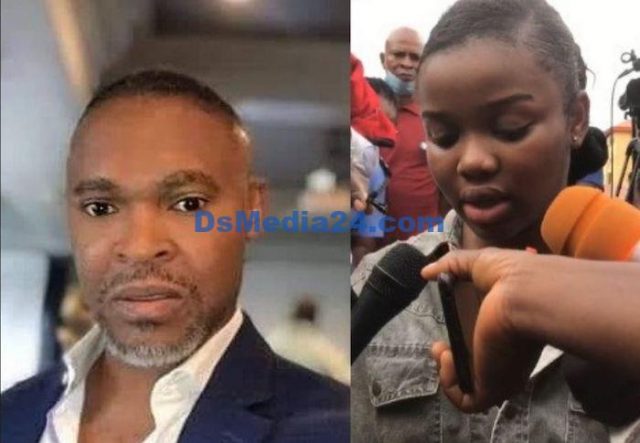 The terrifying video of Chidinma Ojukwu confessing to killing Super Tv CEO Usifo Michael Ataga by stabbing him to death was shown by the Lagos High Court sitting at Tafawa Balewa Square (TBS).

It also saw the gruesome video of Ataga’s lifeless body that had been taken not long after he had been discovered in a serviced apartment in Lagos.

Recall that the main suspect in Ataga’s murder is Ojukwu, a University of Lagos (UNILAG) 300-level mass communication student.

Along with her sister, the third defendant Chioma Egbuchu, and the second defendant Adedapo Quadri, she is on trial for the alleged crime.

They were charged on October 12, 2021, at the high court before Justice Yetunde Adesanya, and have been on trial ever since.

The alleged murder occurred on June 15, 2021, at 19 Adewale Oshin Street, Lekki Phase 1, Lagos, according to the Lagos State Government, which is prosecuting them.

The video recording from a Compact Disc (CD) was presented on a big screen in the courtroom when the proceedings resumed.

It displayed Ataga laying on the ground with his hands outstretched, wearing a white singlet and blood-stained boxers. Blood was on the floor on his right side, and his head was close to the wall.

The floor, pillow, and duvet cover all had noticeable blood stains.

During her questioning by Deputy Superintendent of Police (DSP) Olusegun Bamidele from the Intelligence and Tactical Unit of the State Criminal Investigation Department (SCID) Panti, Yaba, Ojukwu was also seen in the video describing how she killed Ataga.

Ataga urged her to hunt for a place for them to stay on June 13, 2021, thus the defendant obtained the short-let apartment where they ate, drank, used drugs, and where Ataga was slain, according to the defendant. She stated she met Ataga through a friend and they got to talking.

“On Sunday, once I arrived, we smoked loudly, drank, watched movies, and then I went to get lunch.

On June 14, 2021, “The medication we were taking ran out, so I ordered another one and went downstairs to pick it from the delivery guy in the morning.

Then, on Tuesday, we engaged in loud drinking, smoking, and addition of Rophynol to his drink, followed by sex. He was seated in the chair while I was on the bed.

Later, he began bothering me for additional intercourse. He had his way despite my struggles with him, and he still wanted more, and I was exhausted.

“He wanted it, he didn’t seem like himself, and I assumed he had lost interest in having sex, but then he came back to the bed and demanded more.”

He struck his head against a stool that had a glass after I shoved him away. He lost strength due to a wound on his leg.

I grabbed a knife and stabbed him in the neck, ribs, and stomach to stop him from hurting me. I used a cloth to tie his hands.

He was bleeding, and I was terrified. I simply packed everything, leaving my clothes blood-stained as well, and I departed.

“I grabbed the knife and the handkerchief, and when I got home, I tossed them away.

READ ALSO:  Police Ripped Up My Statement, Slapped Me, and Made Me Sign Their Statements—Chidinma Ojukwu

Michael (Ataga) was a friend with whom we recently spoke. We didn’t communicate frequently, and I didn’t know him well.

Ojukwu responded in the video when questioned if she needed help killing the victim because of his build since she couldn’t have done it alone:

When asked why she didn’t call for assistance, she replied:

Naturally, I was afraid, which is why I walked away.

When asked why she killed Ataga, she responded as follows:

“There was no reason for it.”

Ojukwu was also questioned by DSP Bamidele, the ninth witness for the prosecution, about why she was using a foreign number and why she was hiding her number.

The defendant replied that she had already established a foreign phone number on social media, which she used to talk with people.

She responded, “She didn’t ask for my identification,” when asked why the proprietor of the service apartment didn’t recognize her.