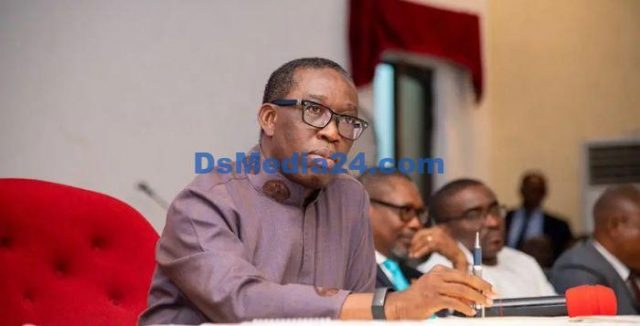 Ifeanyi Okowa, the governor of Delta, has urged the federal government to dredge major rivers in Nigeria and construct new dams to prevent flooding.

The governor visited flood victims at three IDP camps on Tuesday before giving a speech, according to NAN.

In order for the rivers Niger and Benue to be able to hold a large amount of floodwater, Okowa urged the federal government to de-silt them.

He asserted that preemptive measures must be done to prevent recurring flooding every time neighboring nations activate their dams.

Okowa expressed sympathy to those whose loved ones and possessions had been lost in the flood and reaffirmed that 11 holding camps had been set up by the state administration.

“Five deaths were reported around the state, outside of the camps. There are 11 camps here; some are in buildings, some are high up.

The governor emphasized how many different concerns are being impacted by climate change, which has a significant worldwide impact.

“Both the water level and the sea level are rising. Another problem is the Cameroon dam, which consistently creates a significant overflow in our river.

According to the basic knowledge I have, Nigeria could build its own holding dams and regularly de-silt its rivers.

Okowa claimed that because of the sort of dam that will be constructed across the river, the federal government was responsible.

The governor continued by saying that there were medical professionals in the camps to provide care, and some ladies who were pregnant had given birth.

READ ALSO:  Attack On Buhari's Convoy Is Dangerous And Unsettling the Akeredolu