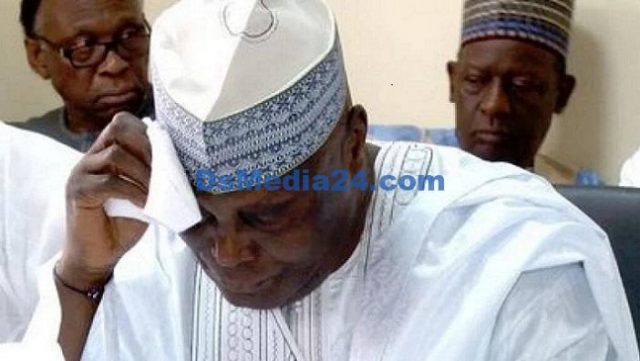 The Peoples Democratic Party, or PDP, formally began its presidential campaign on Monday despite a raging internal turmoil.
Nyesom Wike, the governor of Rivers State, and his allies, who have not yet been appeased, conveyed a stern warning to the crowd following the party’s presidential primary.

The absence of Wike, Ifeanyi Ugwuanyi of Enugu, Okezie Ikpeazu of Abia, Samuel Ortom of Benue, and Seyi Makinde of Oyo, according to observers, is a major setback for the opposition party’s hopes of regaining the nation’s top seat, despite the fact that a sizable crowd attended the campaign flag-off.

Atiku Abubakar, the party’s presidential candidate and former vice president, as well as his running mate Ifeanyi Okowa, the governors of Akwa Ibom and Bauchi, as well as Ahmadu Fintiri, the governor of Adamawa, and Dino Melaye, a former lawmaker from Kogi West, were all in attendance.

The disgruntled governors have already abstained from the party’s main event since Atiku’s ascent.

When the PDP Presidential Campaign Council (PCC) was established in September, Wike and his friends, notably Governor Samuel Ortom of Benue State, continued to abstain, according to DSMEDIA24.

They claim that the PDP National Chairman, Iyorchia AAyu, must step down in order to create a sense of equity in the party’s leadership, as the Southern region of the nation feels ignored.

Before Ayu became the PDP’s national chairman, Wike and his associates were in charge of attending PDP events and making decisions.

However, unlike the APC, the PDP declined to zone its presidential ticket to the South and instead declared it open, allowing Atiku to win the nomination. This was done after Ayu was elected chairman.

Ayu was intended to resign immediately, according to Governor Wike’s group, to make room for a Southerner to take over and provide a balanced leadership in the party. Ayu isn’t prepared for that, though.

A few days earlier, Atiku was alleged to have approached Wike once more in a private meeting in Abuja, where he allegedly pledged to back the governor of Rivers in 2027, just as he had done to the South-East during his meeting with PDP supporters in Enugu.

Shortly after meeting with Atiku, Wike and his fellow G-5 Governors rushed Enugu and conducted a meeting behind closed doors.

Although the G-5 declined to brief the media following the meeting, a source had suggested that they had effectively sealed Atiku’s doom.

They continue to maintain that they won’t support any of the party’s presidential candidates if Ayu refuses to step down.

“Both Atiku and Ayu are resolute in their opposition to calls for the resignation of the national chairman, which indicates that they do not respect the backing of these governors. As a result, the G-5 Governors have also made the decision to keep their ground.

These Governors have been the ones supporting the party, but Atiku and Ayu came out of nowhere and seek to discredit them. They made that point clear again today in Uyo, and there is no turning back. See how far they go,” the authoritative source added.

The Secretary-General of Ohanaeze Ndigbo, Mazi Okechukwu Isiguzoro, commented on the most recent event to DSMEDIA24 and said that the G-5 Governors’ move was not unexpected.

He pointed out that the PDP’s unfair treatment of Southern Nigeria was the reason the G-5 Governors were right to boycott Atiku’s campaign launch.

They have demonstrated that they are genuine Nigerians, Isizuzoro remarked. How would you explain the circumstance where a party’s national leader and presidential candidate hail from the same area? What will they tell the public during the campaign, then?

How would these governors from the South and the Middle Belt go about persuading people to back Atiku? It will be a misnomer and a subpar performance.

“We previously informed you that Peter Obi is being supported by roughly 18 Governors. Atiku is being duped by someone in the White House; he can only survive 2023 if he complies with Wike and his group’s demands.

But if he keeps allowing pride to control him, what occurred to him in 2019 would seem like child’s play in comparison to what will happen to him in 2023. In that election, he’ll finish in a distant third place. Ayu has reportedly refused to stand down since it appears that the gods have clouded his judgment. PDP lacks a sense of fairness and equity in its current form.

Wike alone is a huge movement, so you can’t underrate his absence, coupled with that of his four other colleagues. “You saw that the stadium could not even be full up,” the speaker said.

“Don’t forget that Atiku is not honest in any way about ending the conflict. Remember how he promised the South-East people in Enugu that his administration would help them achieve their goal of electing an Igbo president to lead Nigeria. He was reported to have promised Wike the same presidency in 2027 a few days later. Can you trust the person in charge? The Ohaneze writer continued, “Nigerians are wiser now.