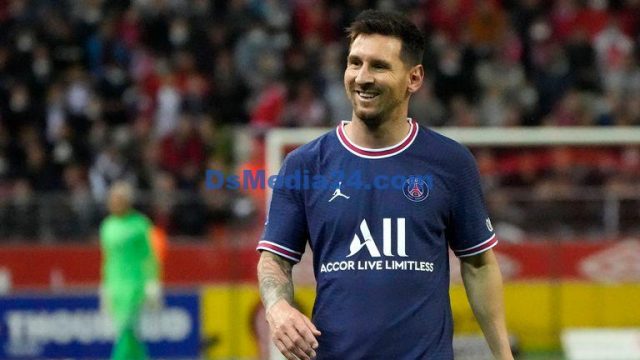 After a challenging first season in French football, the 35-year-old now recalls his spectacular best.

For PSG this season, Messi had already tallied six goals and eight assists prior to Saturday’s Ligue 1 match against Nice.

Additionally, he had four goals when representing Argentina in a recent trip to the United States.

Messi continued his stellar play against Nice on Saturday, scoring a spectacular free kick to give PSG the lead at Parc des Princes.

The seven-time winner of the Ballon d’Or earned the foul by advancing quickly, outpacing two opponents, and being hauled down just outside the penalty area.

After 28 minutes, he unleashed an incredible effort that flew past Nice goalkeeper Kasper Schmeichel and into the top corner to give PSG the lead.

Observant spectators noted that the pitchside advertisements changed to display the word “GOAT” at the precise moment Messi struck the ball.

As soon as Messi scored his most recent goal, which assisted the home team to a 2-1 victory, PSG fans on social media proclaimed him to be the best player ever.

Was, is, and will always be the GOAT, one supporter tweeted.

Another person responded with “The Best EVER,” followed by a goat emoji.

Given his problems in his last campaign, Messi’s performance this year is all the more impressive.