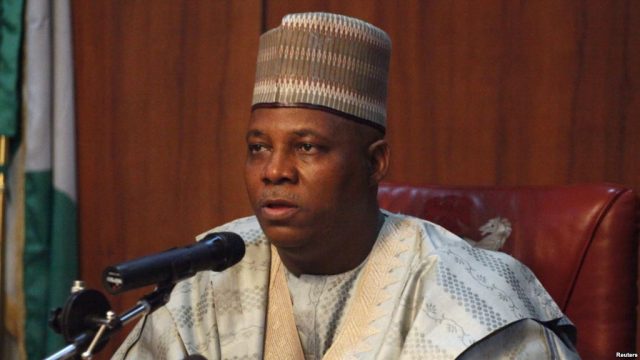 On Sunday afternoon, Senator Kashim Shettima, the former governor of Borno State, said that Asiwaju Bola Tinubu, the APC’s presidential candidate, had not told him that Shettima was the genuine running mate.

Ibrahim Masari, the de facto vice presidential candidate for the APC, had announced his resignation less than an hour earlier.

Shettima has been named the vice presidential candidate by the APC’s national leader, who made the announcement while speaking to reporters shortly after a private meeting with President Major General Muhammadu Buhari (ret.) in Daura, Katsina State.

“I saw Aminu Bello Masari today, and there will be an announcement to completely replace him with the substantive candidate,” he stated.

Despite not having discussed it with Shettima, Tinubu revealed that he was the substantive candidate when prompted to do so.

He said, “Kashim Shettima, I haven’t talked to him about it, but I’ve told you about it.”

After landing at the Umaru Musa Yar’adua airport in Katsina, Tinubu was driven to Daura by the governor of Katsina, Aminu Bello Masari.

Masari, Tinubu’s nominal running partner, said on Sunday that he is stepping aside to make room for Tinubu’s actual running companion in a formal announcement.

Masari made the declaration following a meeting with the front-runner for the presidency.

‘This is to tell our valued party leaders under our capable President Muhammadu Buhari, teeming party members, and the great people of Nigeria,’ he wrote. “I just had an important conversation with the flag-bearer of our great party, the All Progressives Congress, Asiwaju Bola Ahmed Tinubu.

“Recall that last month, following a hotly contested presidential primary ahead of the general elections in 2023, I was nominated as Asiwaju Tinubu’s running mate.

“However, after considerable thought and extensive deliberation, I now wish to resign. I came to realize that my choice would offer Asiwaju more freedom to accommodate and include more individuals, which would put our party in a better position to win the upcoming elections with the backing of Nigerians.

“By standing aside, I feel I can still contribute to our party and the nation in a number of other ways. I want to reaffirm that I have sent Asiwaju Bola Ahmed Tinubu my letter of withdrawal and affidavit to that effect as his vice presidential candidate in the next elections.