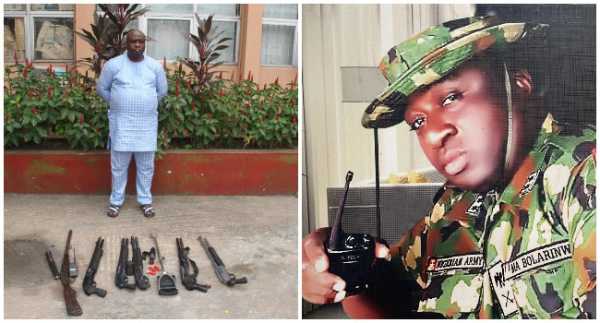 On January 13, 2022, the EFCC announced that it had detained Bolarinwa Oluwasegun, who was allegedly impersonating an army general.

A phony Army general named Bolarinwa Oluwasegun Abiodun, whose actual name is Hassan Kareem Ayinde, was found guilty and given a seven-year prison sentence on Thursday by a special offenses court in the Lagos neighborhood of Ikeja.

Without offering the convict the choice of a fine, Justice Oluwatoyin Taiwo found him guilty and condemned him.

After entering into a plea agreement, he admitted to defrauding businessman Mr. Bamidele Olusegun Safiriyu of N270 million by using the identity of former President Olusegun Obasanjo (also known as OBJ).

Justice Taiwo ordered the prisoner to give the plaintiff N20 million as part of her ruling.

In addition, he must give over four vehicles that were found during a search of his house in Alagbado, Lagos, at 1A Joke Ayo Street.

The defendant must give over the structure at No. 1 Joke Ayo Street in Alagbado, the judgment added.

According to Justice Taiwo, the convict’s actions demonstrate the lengths scammers will go to take advantage of innocent bystanders.

He further stated that because the convict pretended to be a general, he had perfected the con to the point where one might question whether such a person should get away with it.

“It breaks my heart that some people have defamed our beloved nation. I want to make it very obvious to con artists,” the judge declared.

The EFCC filed a 13-count complaint against the fictitious Army general, alleging forgery of documents, money laundering, and possession of documents with a value of N266,500,000 that was obtained via false pretenses.

The charge reads: “Bolarinwa Oluwasegun Abiodun, with the intent to defraud and while purporting to be a General in the Nigerian Army, obtained the sum of N111,400,000 from a company under the pretense that the sum represented part of the amount expended to “press and process” your incoming appointment by the President and Commander-in-Chief of the Armed Forces between June 15, 2020, and December 31, 2020 in Lagos, within the jurisdiction

The charge continues, “Bolarinwa Oluwasegun Abiodun knowingly forged LETTER OF APPOINTMENT AS CHIEF OF ARMY STAFF dated 20th May 2020 in Lagos within the jurisdiction of this Honourable Court and purported the said document to have emanated from the President of the Federal Republic of Nigeria, which document you know to be false.”