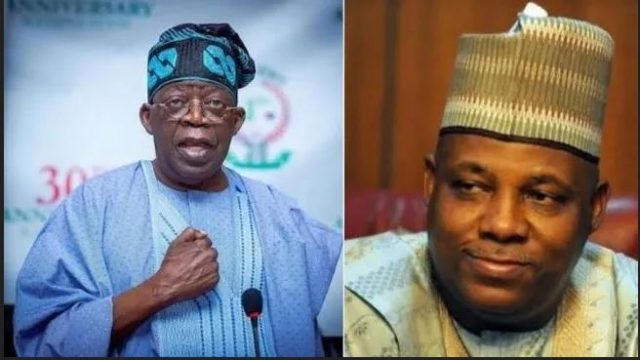 The Christian Association of Nigeria has criticized Ahmed Tinubu’s selection of Kashim Shettima, a former governor of Borno state, as his running partner for the APC presidential ticket.

During a Sunday visit to the president, Major General Muhammadu Buhari (retd), in Daura, Muslim Shettima was selected as Tinubu’s running mate.

Prior to the 2023 presidential election, CAN, the Pentecostal Fellowship of Nigeria, and other civil society organizations have warned against running a Muslim-Muslim ticket.

The spokesperson for CAN, Adebayo Oladeji, said in an interview with our correspondent on Sunday that making such a choice in a divided nation was the wrong course of action.

He claimed that the safety of Christian lives and property under a Muslim-Muslim system could not be guaranteed if there was a pastor serving as vice president of the nation and Christian clerics and worshipers were being murdered.

However, Oladeji cautioned that if Nigerians supported and voted for a Muslim-Muslim ticket, they should be prepared to face the repercussions of their conduct.

He remarked, “We have cautioned against this because we knew what he was going to do. Nigerians are free to choose whatever they want.

You were all still alive when Buhari disregarded our warnings not to let Muslims rule the nation’s security system. I believe it is clear how the crooks are doing without consequence.

Therefore, if Nigerians support Tinubu and vote for him, whatever happens, Nigerians would have to deal with the repercussions. Tinubu has stated that he is choosing a Muslim-Muslim ticket in a country like ours where there is polarization.

“You can only image what will happen if we elect a Muslim-Muslim ticket in a country where a pastor serves as vice president and pastors and worshipers are regularly murdered.

“It is up to Nigerians to make their decisions; let them cast their votes, and we will all take responsibility for the results.

“We’re sounding the alarm. It is ironic that Buhari, who they viewed as an extreme, heard our warning to steer clear of a Muslim-Muslim ticket and chose a Christian as his vice presidential candidate.